It has taken a while to write this. Not because there is little to write about, but because each time I sat to write, I thought of Mohanji…tears filled my eyes and I stopped writing. And this is the magic of the Mohanji Experience. His physical presence comes into your life with the brightness of a billion suns and brightens every corner you allow him into. And as quickly as he changes your most inner self, his physical presence leaves. And you are left with a divine clean space and an overwhelming sense of gratitude. A gratitude that can only be expressed with tears. Not only have I felt this, but so has each person that spent time with Mohanji. This is what Mohanji is……an experience of awareness and gratitude.
The three weeks that Mohanji spent in South Africa is something that cannot be easily articulated. It can only be felt. But over the next few posts I will try and describe each of the major events we had with Mohanji. At the outset I confess that it will not do justice to what we experienced. Just as how one cannot describe the warmth of the Indian Ocean or the tenderness of a cat’s purr, how can one describe a single glance from Mohanji, a passing pat on your back, Mohanji rubbing your shoulders or driving you while on safari.
We will leave this post exclusively for describing the retreat in general. We will post more about other wonderful experiences and specific events that happened during the retreat in separate posts. The planning for the retreat started with a simple decision….South Africa will host its first retreat. That was all that was required to get Seemaji, Ramesh Bhai, and I rolling. The first step was finding a place to host the retreat. Sounds simple enough….but this was a huge challenge. We needed to find the perfect place. One that was conducive to a spiritual event, a place that we could book out completely, could accommodate 40 people and a place whose energy would be as gentle as possible to Mohanji. Between the three of us, we literally contacted more than a 100 different places. We spent hours on the internet, phone and also driving from place to place to look at possible locations. Ramesh Bhai was kind enough to drive us all the way to the Drakensburg to have a look at a place. In total we drove more than 1000kms.
We searched and searched and could not find a place that was adequate. Eventually we surrendered it to Mohanji. And that’s when the magic started….We were directed to Calderwood Hall in Boston. It was the perfect location, and it met all our expectations and more. The staff were angels and so helpful. Now that we had a place, we needed to start getting people to register for the retreat. This too was a process of grace. One week before the final possible date for registration (after three kind extensions by Calderwood) we only had 22 people registered. We were in a panic and desperately needed more people. We worked hard, but the turning point was Mohanji’s blessings. After a week we had 40 people registered, and with Guruji’s blessings we hit our target.
We wanted to make this retreat a little different and wanted to add new dimensions. After speaking to a few people that had attended retreats before, we decided to add the element of bhakti to the retreat. We decided to allow everyone to have one-on-one time with Mohanji, everyone should have a chance to do one arthi individually, and we wanted to show everyone the beauty of doing a prayer to Mohanji. We also made welcome packs for each participant that consisted of: a grass mat, a yoga mat, a silver tray, a picture of Mohanji, a Picture of Mohanji’s feet, a picture of Mohanji’s yantra, a wooden stand for the pictures in the shape of an M (hand made by Linda and Mfana) , a metal hawan kund, a key chain, a blessed large rose quartz, and a packet of all the things that are required to do a small prayer including incense, camphor, hawan samagree, sugar, sindoor, hurdee, chandan, kumkum, viboothi, vastram, yagyopavitram, sugar candy etc.

Each day of the retreat started at 4am with Pujas that took place at the altar set up in the main hall of the venue. Pujas consisted of a Mohanji Padaam Puja, Mohanji Sharanam Astikam, Mohanji kavacham, Mohanji Namavali and either Rudram/Chamakam or Lalita Sahasranam. A few people diligently attended this non-compulsory activity, and the bhav and emotions generated were so wonderful and inspiring. The devotion of the few people that made the offerings to Mohanji’s sandals was so palatable. Just these simple prayers made such a big difference. People’s hearts opened and devotion started pouring out. These pujas were also done to ensure that the atmosphere was regularly cleaned of all released emotions and negativity.
Most people’s day began at 5:30am with drinking two litters of water, and eating some activated almonds and a piece of banana. This was meant to begin the detox process and allow us to flush away stored toxins.

Thank-you to Tashmin and Mohan for facilitating this process. It was freezing cold in the mornings, but people still diligently went to have the water therapy. This shows the changes that were happening in people’s lives. This simple process, together with Mohanji’s blessings, were allowing people to experience changes. People were lighter, happier and more in touch with themselves. This is what makes Mohanji’s retreats different. It’s not about philosophy or learning hundreds of new techniques or common self-help techniques. It’s about experience….experiencing change with awareness and surrender.
There after we had the most wonderful yoga sessions with Ivana. Ivana is such a star and one of the most caring people I know. She so lovingly taught us different pranayama and asanas. For the first three days we were sore, but then our bodies adapted. We began to really get into the groove and I actually miss the motivation we got from her. It was a lot of fun, and we all had detox happen to our bodies. Some of us really went through intense detox, but afterwards we felt on top of the world. 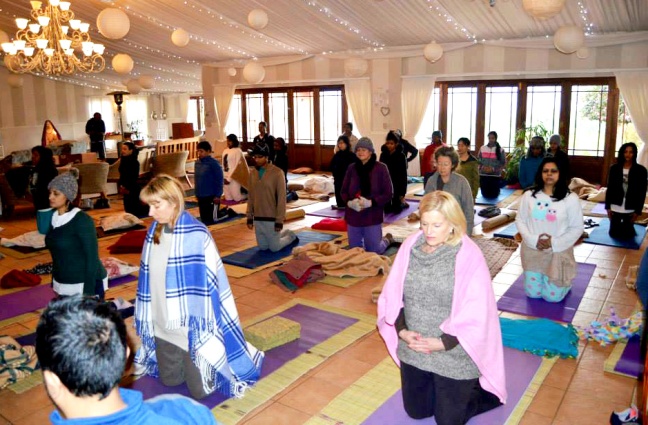 The two satsangs per day with Mohanji were the highlights. These were the most amazing part of the entire retreat. Just sitting and soaking up the presence of Mohanji. Mohanji spoke about so many things, each of which has particular relevance to all our lives. All the stories, lifestyle issues, eternal truths had us at the edge of our seat. However the most important thing was just being there with Mohanji. Such is the path….surrender is the dynamo…all you need is to empty your cup…and Mohanji will fill it up with unconditional love and awareness. The conscious walks and gap awareness breathing all added to the magic of the retreat. We will describe this all in detail in upcoming blogs.
Explaining how to do a simple prayer for Mohanji was a wonderful experience for all. We went through each aspect of the prayer and what the meaning is. We went through the process, starting as an individual doing a prayer, and slowly merging the different bodies with the divine, and eventually reaching the point of understanding described as “Mohanji is doing puja for Mohanji using Mohanji”. While explaining the reasons for offering certain items and the bhakti stories behind them, so many people broke down and released tons of emotions. The prayer session was intense and Mohanji had expanded into universal consciousness. Each time I glanced over at him while we explained the pujas that all of us were doing simultaneously, he just had a big loving expanded smile on his face.
Retreat participants all had wonderful experiences. Some had such profound changes happen to them. Destructive behaviours were broken and masks were removed. Breakthroughs happened without lightning and thunder. This is Mohanji’s way….subtle, consistent and profound.
We all performed a homa on Thursday. What an experience!!!! The energy was amazing. Ramesh Bhai and Uncle Deena performed the Homa on behalf of everyone and I recited the mantras. As soon as Mohanji sat in front of the hawan kund there was an immediate change. Most people withdrew into themselves and internally offered ahuthis. Silence floated as the vedic mantras were chanted. Peace filled the air as Mohanji embodied the fire. Each breath was wood to his internal Agni. Each bite of food was an offering to his internal Agni. And the participant’s bhakti was the ghee offered to his internal Agni. Mohanji was the Agni himself….Mohanji was the Homa!!

There is so much more to describe, and this is just the start. I will soon upload more about some amazing experiences, some of which even shattered all my concepts of Mohanji!!!
A very big thank you to Ramesh Bhai and Seemaji for all their hard work. You guys were on your toes the whole time. Thank you. 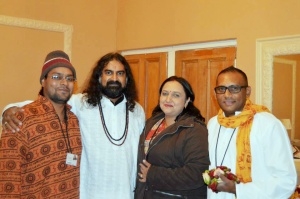 Thank you to Linda and Mfana, as well as Tashmin and Mohan. And of course, a very big thank you and gratitude to our Mohanji. Thank you Babaji for lifting us up. Thank you for introducing us to who we really are. We had become strangers to our own self, and if it was not for you, we may never have met our real self again. Thank you for saving us from ourselves.

One thought on “South African Retreat – An Overview”